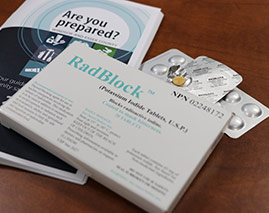 KI is a salt of stable iodine. Stable iodine is an essential nutrient needed in very small quantities for the thyroid gland to function properly. KI comes in tablet form and can be easily swallowed.

How does KI work?

Does KI protect against all forms of radiation?

No. KI provides protection only to the thyroid gland and only against internal contamination from radioactive iodine. Radioactive iodine may be found in emissions from a nuclear generating plant during an accident. KI will not protect against exposure to other contaminants contained in those emissions.

When should I take KI and how will I know to take it?

If there is a threat of a significant exposure to radioactive iodine from Fermi 2 during an accident, the Chief Medical Officer of Health for Ontario will provide instructions through radio, TV, Internet and other available channels on where, when, how, and by whom KI should be taken.

KI is only to be used during an emergency situation at a nuclear generating station.

KI is only to be taken when instructed to do so by provincial authorities.

Who benefits most from taking KI?

Pregnant and breastfeeding women, infants, children and adolescents should be among the first to receive KI as they are at higher risk for developing thyroid cancer after exposure to radioactive iodine.

How many KI tablets should be taken and how often?

People who are at risk from exposure to radioactive iodine may be directed by provincial authorities to repeat dosage every 24 hours for the duration of the exposure and/or until it is possible to evacuate.

Unless otherwise instructed, pregnant and breastfeeding women and newborn babies should take only one single dose of KI and not repeat dosages.

The dosages that follow are consistent with Health Canada and World Health Organization recommendations. Larger doses than those indicated have no additional benefit and may increase the risk of side effects.

What if I have a family member who cannot swallow a KI tablet?

People unable to swallow a KI tablet, and children under three years of age will require a KI liquid solution.

How long are KI tablets good for? How should they be stored?

The expiry date is printed on the label of the KI packaging. The KI tablets should be kept sealed at room temperature and away from the light.

Are there any side effects from taking KI?

The risk of side effects from taking a dose of KI is extremely low for all age groups who have normal thyroid function. The overall benefit during a nuclear emergency outweighs the risks of side effects.

There is an increased risk of side effects for people with thyroid disorders i.e., auto-immune thyroiditis, Graves’ disease, iodine deficiency, and nodular goiter. These disorders are more common in adults and the elderly, and are rare in children.

Rare side effects in other parts of the body, such as gastrointestinal effects or hypersensitivity reaction, may occur but are generally mild. People who are sensitive to iodine or who have an existing or previous thyroid disorder or any other concerns should consult their doctor or nurse practitioner prior to taking KI.

Who should NOT take KI?

People should discuss with their doctor if they have any of the following disorders:

People who are unable to swallow a KI tablet, and children under three years of age, will require a KI liquid solution. Instructions for preparing the KI liquid solution using two 65mg tablets are given below.

To make the KI Liquid Solution, you will need:

*This is the amount to give for one dose. Infants less than 1 month of age should receive only one single dose

KI mixtures keep for up to seven days in the refrigerator. Discard unused portions.