What is climate change?

Climate change is the biggest global health threat of the 21st century (Lancet, 2018).

The results of climate change have the potential to influence health outcomes, and can impact one’s health through temperature-related illnesses, poor air quality, water and foodborne diseases, exposure to ultraviolet rays, as well as an increased risk of vector-borne diseases. The impacts of climate change occur at global, national, provincial, and local levels (Government of Canada, 2019).

Climate change can occur due to natural causes and human activities. Natural factors such as volcanic activity, solar output, and the Earth's orbit around the Sun have contributed to changes in climate. However, human activities such as burning of fossil fuels like coal and oil and conversion of forests to farmland are the major contributors to climate change. Burning of fossil fuels produces greenhouse gases (such as carbon dioxide, methane, nitrous oxide), which have the potential to warm our planet.

The impacts of climate change on human health depend on multiple factors and vary based on the geographic region, environmental factors and the populations living in an area. Some of the impacts have a greater effect on health due to changes in exposure to temperature extremes (heatwaves, extreme cold); increases in other extreme weather events (floods, droughts); and poor air quality due to air pollutants and aeroallergens. These include illnesses due to extreme heat, drowning during a flood and injuries from falls during cold weather. Climate change due to indirect mechanisms, would affect the transmission of many infectious diseases (especially water, food and vector-borne diseases) and regional food productivity and availability. 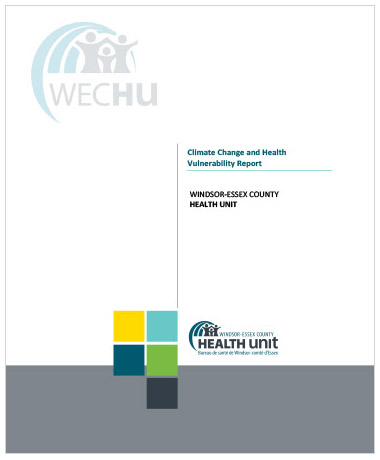 An accessible verison of this report will be published when available.

It is very important for public health units (PHUs) to understand the local impacts of climate change in their communities and work with local government agencies to develop and implement mitigation and adaptation strategies. Better planning through investments in infrastructure and public health strategies can help communities become more resilient.