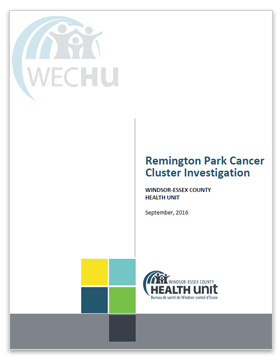 In 2015, the Windsor-Essex County Health Unit, with help from the agencies listed in the Acknowledgements section (see p.3 of report), studied a cancer cluster located in a part of Remington Park in Windsor, Ontario. Between 2000 and 2009, the rate of new lung cancer cases in that part of Remington Park was 2.2 times greater than the Ontario rate. Other forms of cancer were not above the provincial average.

For this study, the Health Unit tried to contact people who were diagnosed with lung cancer between 2000 and 2009 while living in Remington Park. The Health Unit met with 12 people or their next of kin to find common exposures that could explain the lung cancer cluster. Some key findings were:

In conclusion, tobacco smoke was the only lung cancer carcinogen that all 12 people were exposed to in this study. Other risk factors were present, but not consistent among all people. The Health Unit will continue to monitor lung cancer rates in Remington Park and will continue to work with our partner agencies to inform our community on how to lessen their risk of developing cancer.