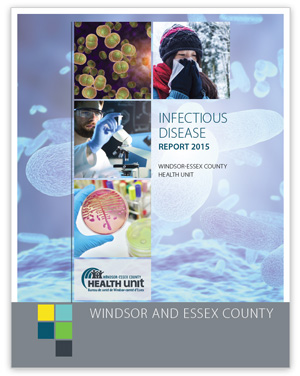 This report provides surveillance information regarding diseases that are reportable to the public health unit under the Health Protection and Promotion Act (HPPA). The information contained provides the evidence necessary to identify key trends in the reportable diseases covered under this report and health issues of local public health significance. Such evidence helps in the tailoring of public health efforts and the improvement of the health of Windsor-Essex County residents.

Information pertaining sexually-transmitted and blood-borne infections have been covered in an earlier report (Sexually Transmitted and Blood-Borne Infections in Windsor and Essex County Report). Institutional outbreaks of gastroenteritis, respiratory outbreaks in institutions and adverse events following immunization are not covered in this report.

Enteric disease refers to illness caused by bacteria, viruses or parasites, transmitted primarily through the consumption of contaminated food or water. In 2015, there were 219 cases of enteric illness in Windsor-Essex County. Salmonellosis had the greatest case burden of any enteric disease (84 cases in 2015). The number of new cases (incidence) of salmonellosis has steadily increased since 2006, and in 2015 the number of cases was greater than the five-year average. In recent years, the incidence of cyclosporiasis and cryptosporidiosis has also increased. Both of these diseases had case counts that were higher than their historical average.  Increases in the incidence of cyclosporiasis and cryptosporidiosis were also observed in Ontario.

Vaccine-preventable diseases (VPDs) are infectious diseases caused by viruses or bacteria for which effective preventive vaccines exist. Nearly all of the diseases are contagious and can be spread through the cough or sneeze of an infected person. In 2015, there were 291 cases of VPDs in Windsor-Essex County.  The most burdensome vaccine-preventable disease was influenza (182 cases for 2015/2016 season). The total case count for the 2015/2016 season was higher than the historical average. After influenza, the next leading VPD in 2015 was varicella (chickenpox). There were 39 cases of varicella (reported in aggregate), and counts for 2015 were much lower than the historical average. Due to under-reporting, case counts of influenza and varicella are likely to be underestimates of the true incidence in the population.

Vector-borne diseases are illnesses transmitted to humans by an animal (vector). Vectors include any animal that can transmit a pathogen to a human (host) such as insects, ticks, and mites. Zoonotic diseases are diseases that are spread from animals to humans through contact (direct or indirect) or through vectors capable of carrying zoonotic pathogens. In 2015, there were 12 cases of vector-borne disease and no cases of zoonotic disease (rabies) reported in Windsor-Essex County. Lyme disease case counts for 2015 (six cases) were twice the five-year average, while WNV (four cases) and malarial case counts (two cases) were below the historical average.

Other reportable diseases (encephalitis and meningitis, invasive group a streptococcal disease (iGAS), tuberculosis, and legionellosis) accounted for 37 cases in 2015.